The Ever Given – a symbol

A symbol of how dependent companies are on their supply chains, of how emergency response has to rely on rudimentary technology, and ultimately of how the little person has to manage the big crisis. 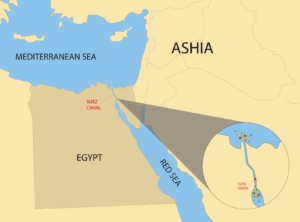 The latest example of how vulnerable supply chains are was provided by the Ever Given accident in the Suez Canal in late March 2021. A canal, nearly 200 kilometers long, 120 meters wide, shortens the distance between the North Atlantic and Asia by approximately 30%. Instead of taking about a week to circumnavigate Africa, a canal passage of 11 to 16 hours is all it takes for ships from all over the world. It’s no wonder, then, that this route is highly frequented and that almost 10% of the world’s trade passes through this bottleneck.

A ship getting stuck there is nothing new – in the past 10 years, about 25 ships have been temporarily stuck there. But none as large or as long as the Ever Given. For the first time in the history of the Suez Canal, it was not possible to bypass a stranded ship. For 6 days, no other ship could pass through the Suez Canal, leaving over 400 other ships stuck along with the Ever Given. Among them were about 20 crude oil tankers, which led to a temporary increase in oil prices of up to 6% with a subsequent collapse in oil prices. An animal freighter with about 130,000 sheep was also among the stuck ships. Although the livestock carrier still had enough food and water, if it had waited much longer, further steps would have had to be taken to prevent the animals from dying in agony.
Delicacy was required to recover the Ever Given. A small dredger against thousands of cubic meters of sand, hoping not to unbalance the giant of a ship weighing tons and, in the worst case, having to unload the cargo to prevent it from tipping over and creating an even bigger and longer-lasting problem. Here, parallels can be drawn with all attempts to cope with crisis. A master plan, clarifications with various parties involved and an operative procedure that needs to be strategically planned are necessary. Ultimately, the result is a massive problem that needs to be solved with seemingly small tools and requires coordination at various levels.

By the time the jam has cleared, 12 more days have passed. During this period, subsequent processes in logistics and companies have also been delayed, and thus with the Ever Given dredged and the traffic jam resolved, it is not over.
The blockade in the Suez Canal has far-reaching consequences: the ports, which were very busy even without the Ever Given accident, are even more congested. This means even longer waiting periods at the ports of call and also that not all ports can be approached. Likewise, problems in port logistics and ship handling follow, as some processes such as docking / departing and loading / unloading cannot be accelerated.
As some ships have decided against waiting for Ever Given to continue its journey, they have sailed along the Cap of Good Hope, which also takes longer and thus causes a delay in delivery. The Egyptian Canal Authority reports a daily loss of revenue of $14 million due to the loss of revenue from these vessels that bypassed the canal, as a transit costs between $250,000 to $500,000. The Ever Given is now expected to pay this loss, of about $916 million, before it is allowed to continue its passage. The owners of the Ever Given are now apportioning these costs to the owners of the cargo on the basis of “Havarie-grosse,” or “great average.” The Japanese shipowner himself only wants to pay 100 million dollars. For some cargo owners, this could mean bankruptcy. Another name of “Havarie-grosse” is “community average”, which better describes what it stands for: in case of an event that puts ship and cargo in danger and measures are taken to save them, all interested parties have to participate – i.e. ship and cargo owners. For the whole world trade, according to the analysis of economists of Allianz, there are losses of about 6 – 10 billion dollars per week.

An interruption of the supply chains for days is fatal. Supply shortages may occur due to dependencies on supplies from other countries. And according to experts, delays and freight prices, which have occurred and skyrocketed due to the Ever Given accident, will not recede for another 4 months.
In Germany, no major impact on production itself is expected. This is partly because time-critical goods are not transported by sea. However, if Germany had JIT production (Just In Time production), there would have been a shortage of materials. And a supply chain interruption lasting days is fatal for manufacturing companies. Nevertheless, the consequences are being felt in Germany. Lidl and Aldi, for example, report that products advertised in their leaflets did not make it into the stores “due to the Suez Canal issue”.
The fact that there is usually no JIT production, although it would be possible in parts, is a decision that is made to keep the effects of external influences lower and to protect against possible effects. It is not just the result of a blocked sea route, but also natural phenomena such as volcanic eruptions, earthquakes and tsunamis often cause interruptions in world trade. As a result of climate change, the latter events are becoming more frequent. But that is not all. Political decisions also have an impact. For example, the trade sanctions imposed by the U.S. against China – so how can you protect your company from the effects of supply disruptions of any kind, apart from not using JIT production?

It is advantageous if redundancies exist and there is no dependency on the on-schedule arrival of certain deliveries. This can be achieved, among other things, by having a basic level of inventory in reserve, which the company can use to cover a certain period of time at an acceptable level.
If the reserves are coming to an end, one should have sorted and set one’s priorities as regarding which SLAs are to be served and which company processes have priority. To do this, the company’s own processes must be understood so that the critical services can be identified. Ideally, less important processes have already been shut down in order to achieve the most efficient use of resources.

We are happy to support you and help you to make your company crisis-proof!